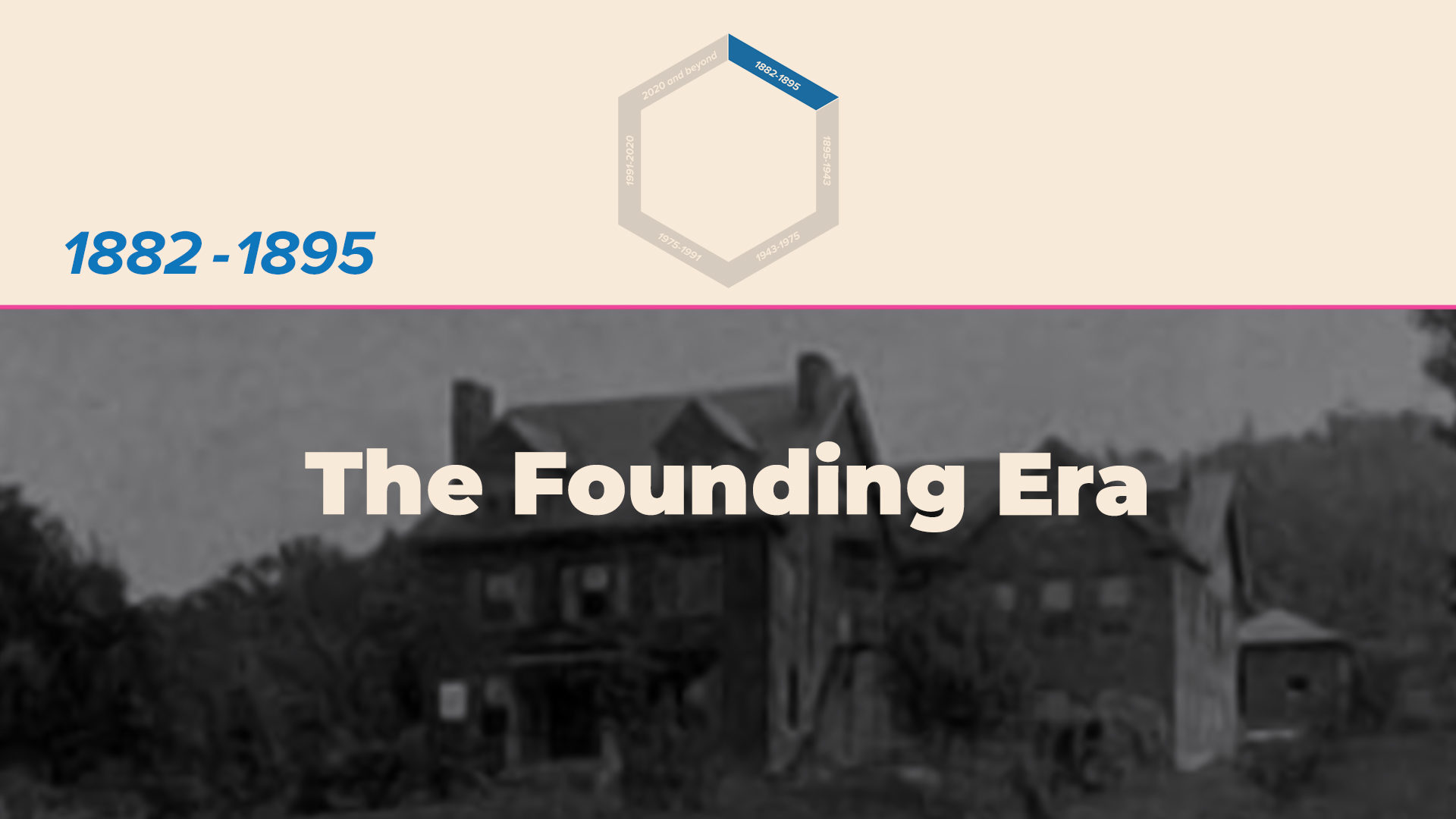 A community responds to care for children orphaned in an epidemic, and an institution is born.

In 1882, in response to a smallpox epidemic in the Lehigh Valley, local industrialist William Thurston founded an orphanage for children who lost their parents to the disease.  Thurston, president of Bethlehem Iron Company (later to become Bethlehem Steel), was joined in the effort by Julia DeWitt Coppee, the wife of the first president of Lehigh University, and other leading citizens of the region. In 1886 the Thurston Home was renamed The Children’s Home of South Bethlehem and the first live-in matron was hired. Over the next decade the Children’s Home cared for children whose families were ravaged by disease and poverty, until it was determined that the organization needed to expand. 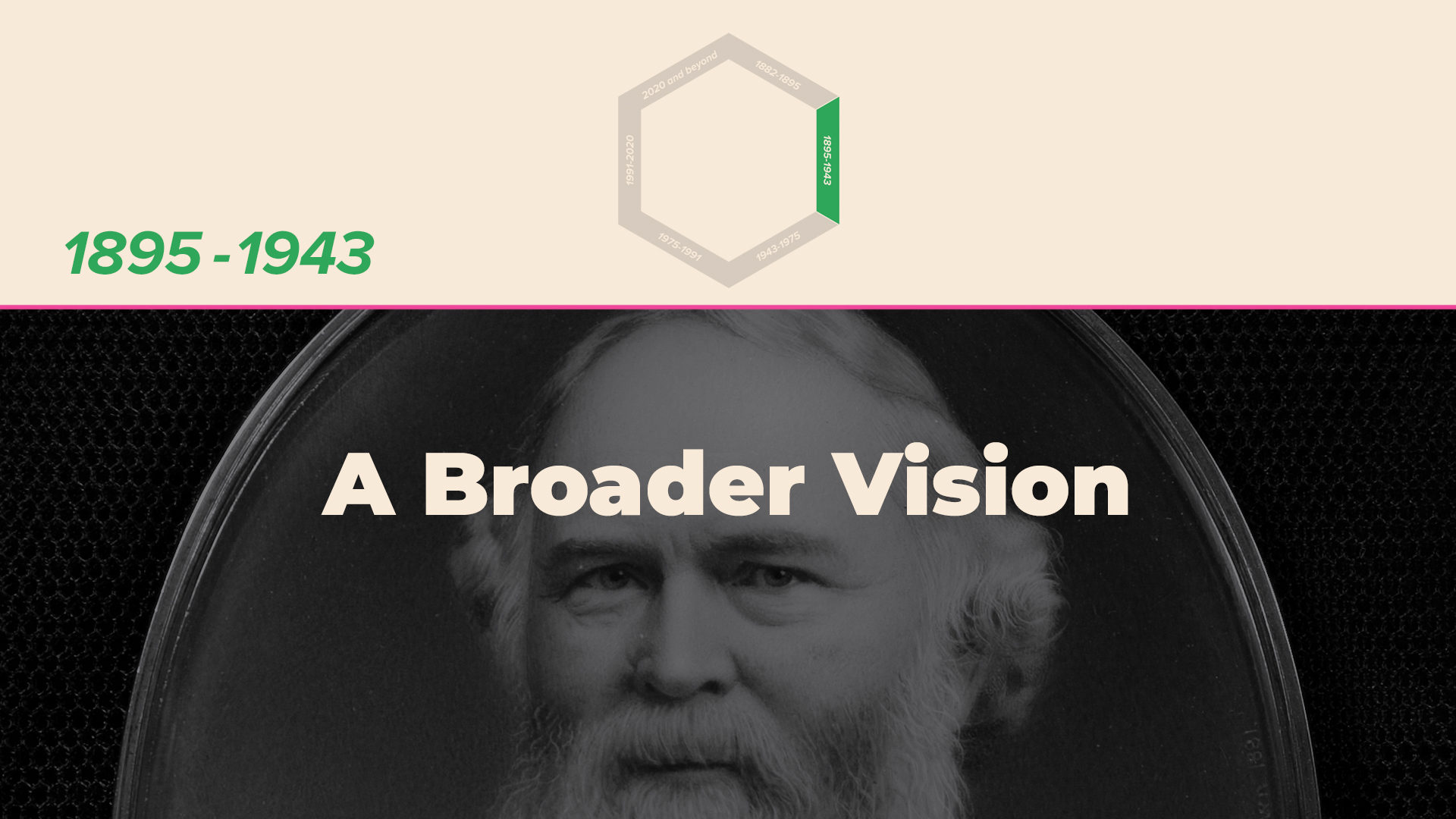 The generosity of a grieving husband leads to a new name and forward-thinking changes in caring for kids into the 20th century.

A retired Marine Corps officer, Capt. James Wiley, donated $6,000 in 1895 to build a new Children’s Home facility in the newly incorporated village of Fountain Hill.  Named at his request for his late wife, the “Annie Lewis Wiley Memorial Children’s Home” doubled the number of children in the organization’s care.  Into the first years of the 20th Century the Children’s Home adopted progressive policies for the time – for example, barring staff from administering corporal punishment, and dedicating itself to keeping local orphans in the community rather than sending them in “orphan trains” to work as indentured servants in the Midwest and West.

Later, the Children’s Home shifted focus to providing foster care to children whose families were split amid the Great Depression and the start of World War II.  The organization adopted the informal name of “Wiley House” as its official designation in 1943. 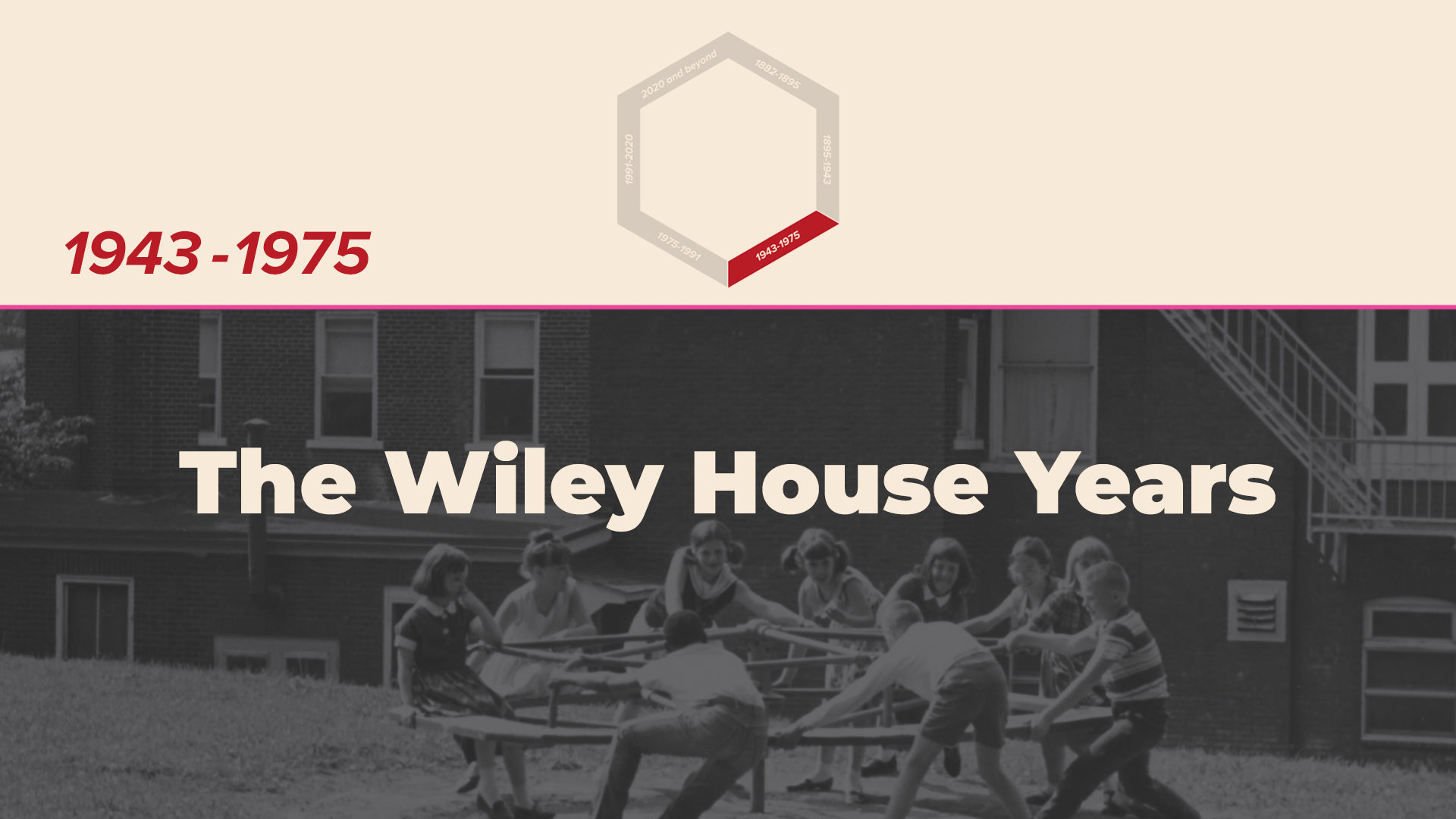 Growth in the number of children needing care led to significant changes in the Wiley House organization through the war years – with matrons replaced by superintendents and then Executive Directors with experience in community relations and business as well as social work.  After the war, American volunteerism enjoyed a revival, marked by the creation of the Wiley House Ladies Auxiliary (now the KidsPeace Auxiliary); Auxiliary members have participated in fundraising efforts and campaigns ever since.

In the 1950s, Wiley House began to focus on addressing the mental health and education challenges of children with special needs; in 1958, inspired by a national movement for children’s rights, the organization hired its first caseworker and revised its intake policies.  In the decades to follow, as our society became more understanding of mental and behavioral health issues, Wiley House continued its evolution from custodial care to helping children with significant emotional and psychological challenges. By the 1970s the organization had expanded its programming to admit children from outside Lehigh and Northampton counties; the original Wiley House facility and its additions, which had deteriorated significantly, were demolished for more modern facilities reflecting the organization’s evolving focus. 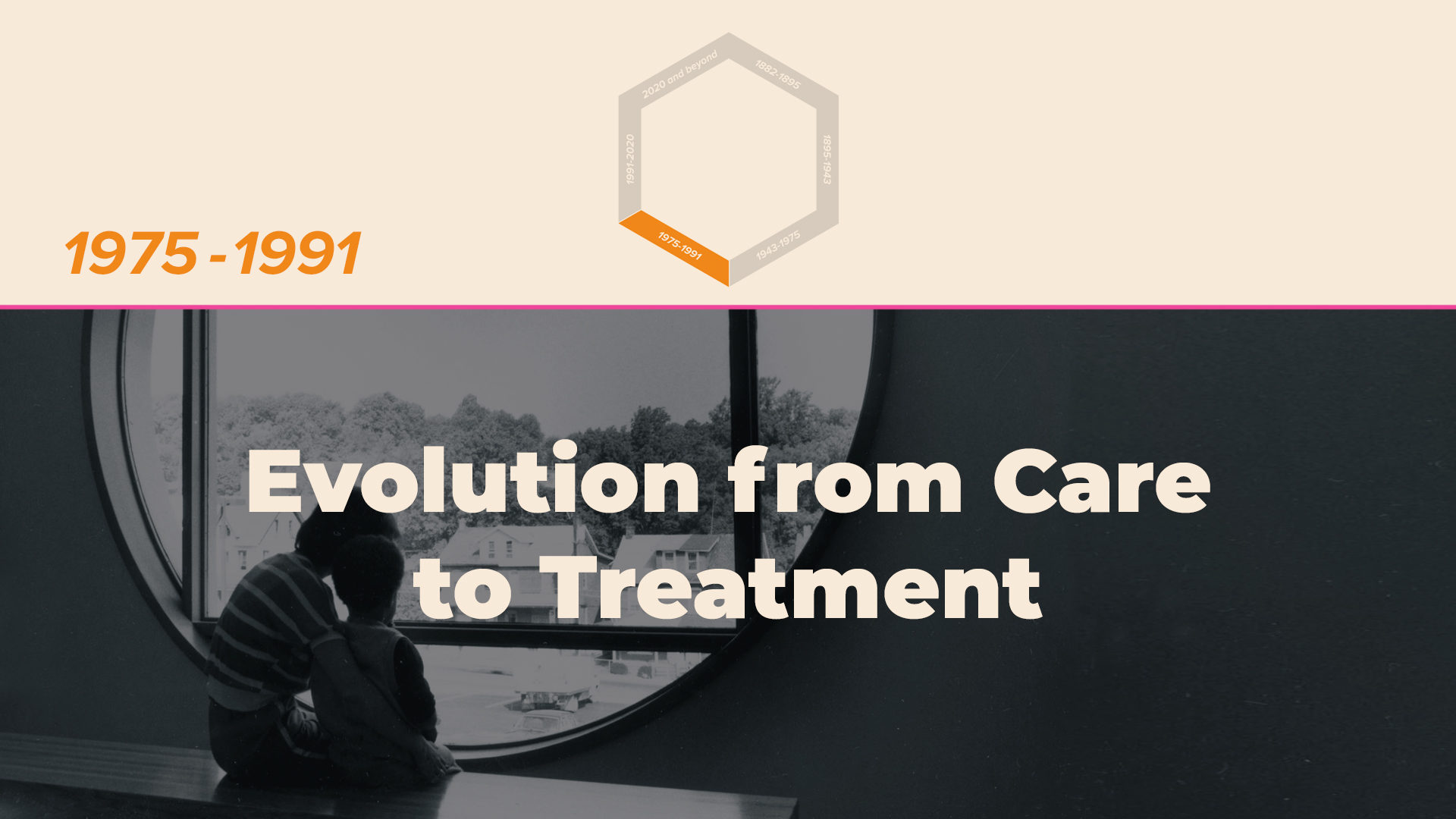 The emergence of the “Continuum of Care” marks an evolution toward modern services for mental and behavioral healthcare for kids.

A new Child Development Center and residential cottages at the Broadway site were just the physical evidence of the shift to a treatment focus for Wiley House in the 1970s.  The organization became licensed to provide partial psychiatric hospitalization, adding a full range of clinical professionals to its staff.  It also initiated day treatment and group home programming, as well as specialized schools and therapeutic foster care services.  The changes prompted a radical rethinking of Wiley House’s mission: a dedication to providing a “Continuum of Care,” that would meet children’s emotional and mental health needs in ways that they could best be addressed throughout the development of the child.

In 1984, Pennsylvania Senator Arlen Specter chaired a major fundraising campaign to build the Child Development Therapeutic Recreation Center (CDTRC); it opened in 1986 and provided a full range of recreation services to kids in Wiley House’s programs.  The organization expanded its day treatment and therapeutic foster care services throughout eastern Pennsylvania, while establishing intensive treatment programs in other states (such as the Graham Lake residential and community program campus in Ellsworth, Maine).  As the 1990s began, the organization was positioning itself for an expansion of its Continuum of Care on a national basis. 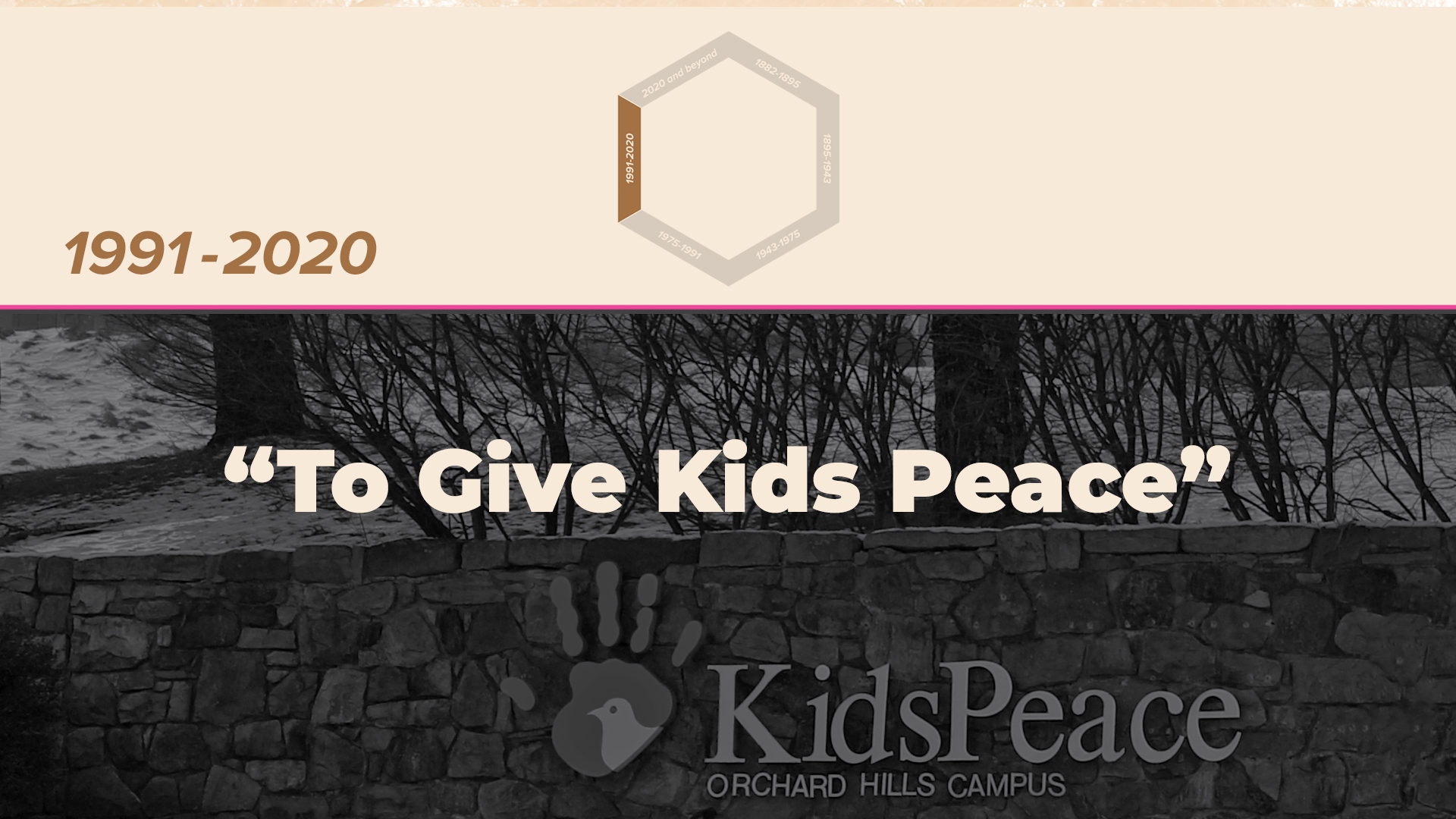 In the late 1980s, Wiley House began planning for a major expansion on a former fruit orchard in North Whitehall Township, PA.  The new Orchard Hills Campus would house a free-standing children’s psychiatric hospital, and a greatly expanded residential treatment facility.  The campus’s residential treatment program began with the 1991 opening of the 100-bed Patriot Center, followed in 1992 by the 100-bed Inventor Center.  In 1993 KidsPeace Children’s Hospital opened – making Orchard Hills one of the premier children’s treatment centers in America.

Wiley House changed its name to KidsPeace in 1992.  Foster care services were extended in Pennsylvania, New York, Indiana and Maine, and established in Maryland, North Carolina and Virginia.  A residential treatment campus in west Georgia was located in the town of Bowdon and began accepting kids in 2004.

In addition to treatment advancements, the era saw the organization using its status to promote prevention and education efforts about mental health concerns – with the creation of the KidsPeace Institute (training and certification), and www.teenCentral.net, a web-based therapeutic support service for teens and young people that is anonymous and confidential. The decade of the 2010s also saw a rise in demand for programming designed to address needs of individuals on the autism spectrum, with the introduction of approaches that respected their situation as an example of diversity in society, rather than a condition in need of a cure.

KidsPeace experienced financial issues in the late 2000s amid the economic impact of the Great Recession and changes in state policy regarding out-of-state placement of children in treatment programs. KidsPeace programs began to focus on trauma-informed approaches to treatment, bolstered by evidence-based practices in its programs.  In the latter part of the 2010s the organization also adopted de-escalation approaches under a Culture of Safety, in an effort to enhance the safety of both clients and staff.

From its founding KidsPeace has relied upon community and philanthropic support to enable it to help kids in need.  In 2017 the KidsPeace Foundation was created to improve and expand our connection to donors, potential donors and other supports, to ensure that we have the resources necessary to “bridge the gap” between program-related revenue and the need to continue to provide the exceptional care our kids need and deserve.

A Future of Challenge and Opportunity – 2020 and beyond

Looking past a pandemic into a bright future – 140 years in the making.

Like nearly every field of endeavor, KidsPeace’s work was severely affected by the emergence of the COVID-19 coronavirus in the spring of 2020.  The situation for mental health service providers was additionally complicated by an unanticipated effect of the pandemic: a realization of the importance of mental healthcare, especially in terms of children’s development, and a resulting increase in the demand for such services.  KidsPeace, like other providers, was caught between the rising demand for its services and pandemic-related staffing limits on the ability to meet that demand.

The pandemic also underscored how vital the organization’s associates are to its mission; their efforts in continuing to treat clients while dealing with their own pandemic-related fears and uncertainty were celebrated in a poster and public relations campaign asserting that at KidsPeace, “Heroes Work Here!”

As society continued to work through the pandemic’s effects, mental health providers looked ahead to a changed world: persistent staffing shortages and program cost increases, higher demand for services as the stigma around mental health fades, and regulatory changes ranging from more stringent oversight of residential treatment to a shift away from traditional foster care to a model that emphasizes continued birth family involvement whenever possible.

As it marked its 140th anniversary in this uncertain environment, KidsPeace remained committed to the trauma-informed, evidence-based model, and on a broader sense reaffirmed a central principle of its history: its focus on evolving its approach to care on an ongoing basis.to meet the needs of the people we serve — to give Hope, Help and Healing to children, adults and those who love them.